A ride on the mother's hip
by Dr. med. E. Fettweis 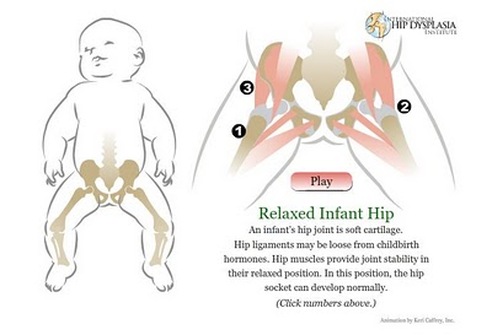 When a child is born, his or her hip joints are often not completely developed. This is no cause for concern, as it is completely normal. When raising a child, there are, however, some simple rules one should follow to ensure that healthy hip joints remain healthy.

Examination of the infantile hip by ultrasound is a must! Dr. Hans Dieter Matthiessen wrote in the German journal for orthopedics Orthinform, edition 2/2004. To highlight this point, we will again explain what ultrasound is supposed, above all, to accomplish: to eradicate, by early diagnosis and treatment, congenital dislocation of the hip and its most detrimental consequences.

Prior to any efforts made to implement the early detection of congenital hip dysplasia, which was essentially facilitated by ultrasound, and first introduced in the 1970's by Prof. Dr. Reinhard Graf, four to five out of every 5000 children, who were just learning to walk, were reported to limp or waddle, walking with a so-called "waddling gait". They had shorter thigh bones and an extremely arched back.

Around the turn of the 20th century, the leading orthopedist in this sector was the Austrian Dr. Adolf Lorenz (known also for his humorous biographical novel "Wenn der Vater mit dem Sohne" or ("The father with the son") Dr. Lorenz was convinced that this disease was not "congenital" but was instead a preliminary developmental stage.

Ultrasound helps to diagnose this developmental stage. At the same time, it has been found that there is not ONE stage but SEVERAL uniquely different developmental stages - from very stable hip joint sockets or only slight developmental delays to very abnormal hip socket formations. Today, we know that hip dysplasia is not caused by the child's first independent steps but rather when the hip joints are kept in a position of extension too soon after the birth and throughout the first year.

During pregnancy, the embryo's legs are for the most part flexed at an angle greater than 90 degrees. Most parents know this from the ultrasound images of their unborn child. Flexion increases as pregnancy progresses until, towards the end of pregnancy, the unborn child cannot bend his/her legs any further. In earlier times, this position was assumed to promote hip dysplasia. Today we know: it is the ideal position to encourage the healthy development of the hip joint sockets.

The process of extension commences at birth and progresses until, towards the end of his first year, the child is able to stand independently. The "unfolding" of the little human body has to be borne above all by the hip joints. If the hip sockets are not fully formed, the head of the thigh bone can slowly slip out of place until the hip joint becomes completely dislocated. Therefore, it is vital to encourage the stabilization of the hip joint sockets after birth.

The human being is "physiologically premature" at birth. The greater part of the newborn's skeleton is formed of cartilage. Flexion of the legs is ideal for the optimal development of the hip joints. This is indicated, for example, by the fact that hip dislocation can rarely be found in societies where children are carried in a carrying cloth - their legs are flexed at 90 degrees or more, moderately abducted (spread apart) and cannot be extended. In this position, the muscles exert pressure centrally over the head and the socket of the hip and thus cause hydrostatic pressure to build up in the cartilaginous part of the hip joint which, in turn, stimulate ossification.

Crawling produces similar effects. Not every baby, of course, needs to adopt this bending position. Still, when parents position their child, they should try to encourage this optimal position and, above all, they should avoid everything that counteracts it. Parents are often not aware that, through unfavourable influences on the child's body, even well developed hip joints can turn into damaged ones. The once traditional method of swaddling, especially, can have unfavourable effects. While tightly swaddled, legs are kept in an extended and adducted (drawn together) position. The nappies between the baby's legs can function as a pivot axis and dislocate the head of the thigh bone. Thus, hip dysplasia is found in societies where children are wrapped and carried in swaddling cloths.

Moreover, it is not recommended to place babies in a prone (face down) position before they can turn over by themselves (at about five to six months), as their legs are forcibly extended in this position.

Premature straightening of the legs and everything that might impair the natural flexion of the legs must be considered unfavourable -  e.g. casts, heavy blankets and pillows.          There is also risk of injury in the lateral position (on the side) unless one takes care not to adduct the upper lying leg. Babies should lie in bed with their upper body slightly raised. By using blankets, pillows and the mattress, the hip and knee joints should be held in a slightly flexed position, while legs should be able to move freely.

Thus, it is advisable to use a baby romper or sleeping bag, rather than a blanket/douvet. Nappies should be fastened so as to support the abduction (spreading) of the thighs. Children with risk factors - i.e. those with a family history of hip luxuation or children born by breech delivery with extended legs (which accounts for approx, 60% of all breech positions) - are recommended to wear double nappies.

Carrying cloth such as wraps and Mei Tais are ideal

It would be ideal to carry babies in suitable cloths as often as possible. The infants' hip joints are shaped in a way to allow for riding on the hip. Due to its body angles, the head of the femur fits optimally into the hip socket. There are a many good reasons to carry babies, some of them are also of psychological nature. There is a large number of manufacturers and vendors offering carrying aids in the internet (just do a search on baby sling, baby wrap, babywearing, Asian baby carrier). Instructional guides are, as a rule, confusing and possibly rather discouraging. Just keep in mind: people in primitive societies did and do not need such complicated instructions.

All you need is a well chosen carrying cloth or wrap, made of natural fabric. It has to fit perfectly around your baby's back which is and should be rounded(!), and it should also support the head of very young babies. They will learn to control their head often after a few days. The baby's back will not suffer from being carried. It rather promotes the healthy development of the baby's spine. When children are older, they can be carried on the back without any problem. My three daughters carried all their twelve children in this position.

Carry your child!
It cannot be repeated enough:
Being carried on his or her parent's body, is a perfect prerequisite for a healthy development and protection of the newborn's hip joints. provided hip and knee joints are flexed and legs are moderately abducted and not extended. The best thing you can do for your child is therefore to carry him or her next to your body in a carrying cloth.