I am not very convinced of carrying a baby facing away from the mother's body. This carrying method really loses out on all the anatomical advantages of the carrying.

The children don't take up an ideal leg position that would prevent a hip dysplasia, this carrying method rather encourages it.

The posture of the torso is not very helpful for a baby as during the carrying with a sling the fabric widths are running across the child's shoulders. In this way, they will push them backwards so that an unwanted straight posture is forced. This might cause an untypical hollow back for a child at a young age. In addition, a child won't sit on its nappy-padded bottom, but the weight will be rather distributed onto the cartilage structures of the symphysis, the pelvis. This means that it is sitting on the crotch, and boys on their testicles. 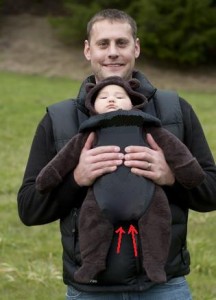 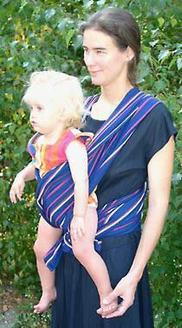 Furthermore, the baby will be directly confronted with all the information of the surroundings. Our little ones still have to learn to distinguish between what is important and unimportant, also how to blind out unneeded information. Babies, carried in this way, will be stimulated too much and are particularly awake. It seems to please them to be able to see so much. But the exposure to this flood of information is often not ended at the right time as the babies can't withdraw from it by themselves.

On one hand, an independent turning away, even if the baby could do this, wouldn't be possible. On the other, because too much information holds the babies' attention, even if it is too much for it. It is possible for babies to turn away from strong stimulations when they get tired, the head sinks to the side, the body tension lessens. Then the stimulation components are not in the field of vision anymore and the facination with it is interrupted. All this isn't possible with the carrying method where the baby faces away from its mother's body. 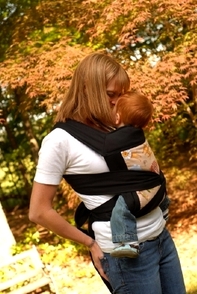 At some point the information flood has to be digested by the baby, mostly during the late evening hours. This is most often a critical time, anyway, becasuse the transition from resting state to sleep has to be mastered. Not an easy task for a baby.

Thus, if the babies are very curious and want to see more of their surroundings you could either carry them in the sideways/hip carry, which could be strenuous for the carriers' back, though. Or you could pass on to the back carrying methods. You should carry your baby in a way so that it can watch the surroundings over your shoulders. This is usually difficult with the conventional carriers - but a woven wrap or Mei Tai such as Didymos and Om Baba make this possible.