The influence of carrying on infant crying
Excerpt from a trial by Dr. med. Urs. A. Hunziker
Children's hospital, Winterthur, Switzerland 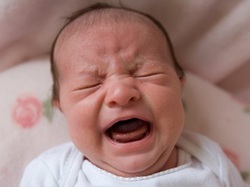 (...) The crying behaviour in the control group developed as ex[ected, starting at an average crying duration of  1,6 hours per day in week three peaking at 2,1 hours per day in week six and then decreasing to 1,1 hours in week 12. The trial reproduced and confirmed the crying curve described by Brazelton with a peak at the age of six weeks.

(...) Simultaneously, the group with increased carrying recorded increased awake contentment corresponding exactly to the reduction of crying. The sleeping behavour, instead, remain the same. Similar observations could be made in weeks 8 and 12. (...)

To sum up, our study showed a modification of the crying behaviour in infants who were carried regularly during the first three months: